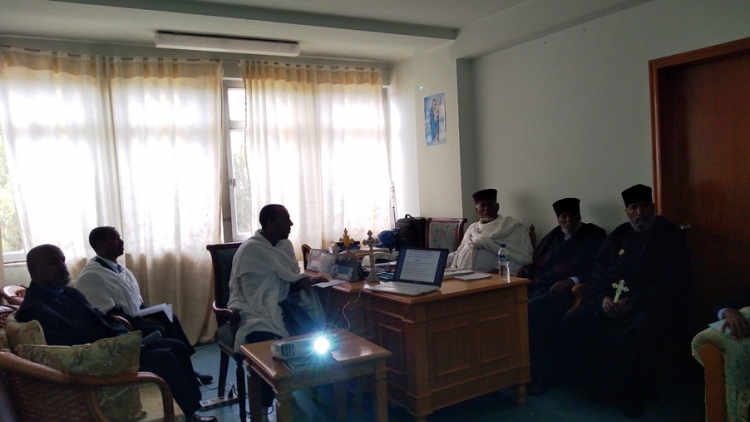 A research paper conducted on the possibilities of establishing a central Church Museum on the Premises of the Patriarchate Headquarters was presented by volunteer curators at a meeting attended by the locum tenens, His Grace Abune Petros, other bishops (representatives of the Holy Synod) and Heads of Patriarchal Directorates. The experts presented their assessment research on 22 September 2012 G.C (3 October of 2019).

The presentation focused on introductory museology, documentation processes, registration and categorization, ways and techniques of preservation/ conservation as well as development of administrative systems. The experts also presented on the possibilities of establishing a small Church Museum on the premises of the Patriarchate Office.

It was disclosed on the report that, although the significance of preserving the heritages and relics of the Church was imprinted at the Constitution of the Church (Qale Awadi), Article 38 and 46, not much activity has been going on, owing to lack of expert knowhow and budget. The experts stated, “Although the ancient monasteries and churches of Eritrea are rich with age old relics and heritage, there is very low awareness of this treasure on the side of the public in general and the youth in particular”.

The participants of the presentation emphasised the role history and heritage of the Church play in: building the identity and tradition of the society and the nation, preserving belief and traditions of the church, as well as transferring cultural treasures to the next generation.

This immense task can be accomplished if it starts with creating awareness, centred on the cultural heritages of monasteries and building a consensus on the side of respective stakeholders’ for a mutual concerted effort, the researchers claimed.

It is to be recalled that, although it is rich with impressive history, variety and quality of both tangible and intangible heritages, yet, the Church doesn’t have a centralized museum of its own. The participants assert that, “now is the time to establish a small scale prototype museum on its premises.”

That is why the participants called for a concerted effort to discover, register, inventory and research the various heritages and relics found in the ancient monasteries and churches.  “In comparison with what we have observed at the preservation drives of sister Churches and the sites of the Holy Land, there are apparent lags in displaying the invaluable treasures the Church has,” the assessment research unfolded. Their Graces the bishops who participated in the event also urged the youth to enhance their efforts to preserve their history, heritage and identity.

Based on the presented research, an understanding has been reached to establish a small museum that will display holy relics, parchments, apparels, graphic history and heritage of monasteries and history of Eritrean Saints.

It is assessed in the meeting that, the museum should be able to create a conducive environment so that it should be able to relate and inform not only tourists, but also and more importantly the youth and children, to the history and heritage of forefathers.