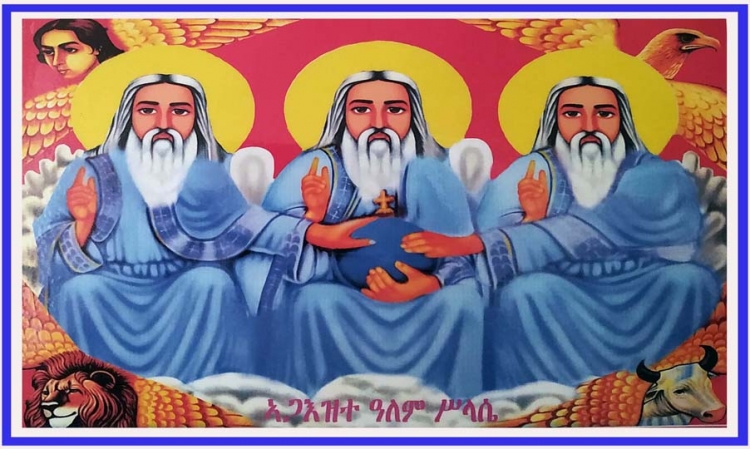 The name God signifies the Divine Being, meaning He who created the world and governs it. There is one invisible and inscrutable Almighty God who created all things eternal, who has neither beginning nor end, mighty in His work who revealed Himself to mankind as written in the Scriptures. (Ex 3,6). Some of the ways that prove the existence of the eternal God are the following.

Creation:- man has sought to understand the Being of God and has discovered ways that lead to the knowledge of the existence of God. Everything has its causes. A painting has a painter, a book has an author, and a chair has a carpenter. For all things that move, there is a moving force behind them.

Accordingly, it is believed that all creation cannot be brought into existence without a creator. All creation, from the minute to the great, from the living to the non-living lead to the acknowledgement of a Creator- the Being of God.
Solomon said “yes, naturally stupid are all who are unaware of God, and who, from good things seen, have not been able to discover Him- who or, by studying the works, have not recognized the Artificer…. Let them know their Creator seeing the sun and the moon”. (Wis.13:1-10)
Job also has expressed “But ask now the beasts, and they shall teach thee; and the fowls of the air, and they shall tell thee: or speak to the earth, and it shall teach thee: and the fishes of the sea shall declare unto thee. Who knoweth not in all these that the hand of the Lord hath wrought this?” (Job 12:7-9)

St. David in his Psalms 19:1-2 tells us that “The heavens declare the glory of God and the firmament sheweth his hand- work”. St. Paul, the great Apostle has stated it in a clearer way that God is known to his creations by the things that are made when he said, “Because that which may be known of God is manifest in them; for God has shown it unto them. For the invisible things of Him from the creation of the world are clearly seen being understood by the things that are made His eternal power and God head so that they are without excuse”. (Rom. 1:19-20)

A person who is looking at a sailing ship in the sea should know that it is being guided by a navigator. In the same manner it must be realized that there is God, who guides the universe though He is not seen to bodily eyes.
St. John Chrysostom, in his Homily, in which he interpreted this epistle of the Apostle said, God brought all and everything out of nothing into being, to manifest His glory through His works.
As the spirit of human being is invisible but is known by the state of motion, God is invisible to bodily eyes, but is manifested and known through His will and works. (John Chrysostom Homily; Rom. 1:9)

The Law of conscience: “The gentiles do not have the law, but whenever they do by instinct what the law commands, they are their own law, even though they do not have the law. Their conduct shows that what the law commands is written in their hearts. Their consciences also show that this is true, since their thoughts sometimes accuse them and sometimes defend them” (Rom. 2:14-15) Man does good and refrains from evil due to his spiritual conscience. When he does evil things, he feels guilty conscience. If a person does good or bad, his conscience witnesses that he would be recompensed or condemned. This type of conscience leads to the knowledge of God, who recompenses everyone according to his deeds.

History: the history of mankind testifies that all the people who ever lived in the world had some sort of a religious belief. Ever since the existence of the human race on the Earth, all human beings have worshipped a god or gods in their own ways. All this show existence of one true God. If God does not exist where could man find the idea of worship? (Acts 14:11-17; 17:26-29)
It is widely written and explained in the Holy Scriptures about the existence of God and His attributes. These are: -

Love: - God is love. He loves his creatures and gives all that is good to them. This has been repeatedly cited in the Gospel of the Evangelist John in his epistles (1 Jn.4:8). His Incarnation also signifies His love. (Jn. 3:16; Rom. 5:5)

Wisdom: when we see and contemplate creation and the natural laws, we understand the perfect wisdom of God. Admiring the wisdom of God, the prophet David says “O Lord, how manifold are your works! In wisdom has you made them all; the earth is full of your creatures”. (Ps.104:24).

Furthermore, there are other attributes which particularly belong to God. These are:-

Omniscience: God knows all and everything before it comes to pass and knows things before they are thought or done. (Ps. 139:2; Jn. 2:25).

“whither shall I go from Thy spirit? Or whither shall I flee from Thy presence? If I ascend up into heaven. Thou art there! If I make my bed in hell, behold Thou art there! If I take the wings of the morning, and dwell in uttermost parts of the sea; even there shall Thy hand lead me and Thy right hand shall hold me.” (Ps. 139:7-10; Jer. 23: -23, Liturgy of the 318 Fathers’).

Eternal: God is eternal and cannot be limited in time. He was before time and lives endlessly. (Ps. 89:1-2) He has neither beginning nor end. He is the beginning and the end. There is no change in Him (Isa. 44:6; James 1:17)

May our LORD Jesus Christ be with all of us!!!